If I recall, it was right around this date last year that our pandemic lock-down began in earnest. My anxiety–as an immune-compromised person–had already been building for a couple of weeks when faculty and students at my college got an email saying classes were suspended, immediately, and that we would be moving everything online the following week. I remember feeling chagrined and relieved, and not a little disoriented.

It’s hard to believe a full year has passed, that Spring, once again, is just around the corner. I’m eager for its arrival, but it seems a bit hesitant, showing its face only in fits and starts of sunshine and birdsong. I decided to urge it along with a colorful ball-cap, one that bursts with blooms in spite of its declaration of grim reality. Cancer sucks, and the buds beginning to emerge on the trees make my heart sing. Both of these things are true.

If you can’t tell, the flora on my cap are of my own creation. A sweet Agnes Scott College classmate of mine sent me the undecorated cap several years ago when I was first diagnosed, and after that first round, it got tucked away in a closet. When I found it recently, I decided to give it a spring makeover with some fabric markers. Along with the flowers, I included a couple of lines from a favorite poem, “The Peace Of Wild Things,” by Wendell Berry, which captures so beautifully one of the reasons why I am eager for milder days and the access to the natural world they grant:

When despair for the world grows in me
and I wake in the night at the least sound
in fear of what my life and my children’s lives may be,
I go and lie down where the wood drake
rests in his beauty on the water, and the great heron feeds.
I come into the peace of wild things
who do not tax their lives with forethought
of grief. I come into the presence of still water.
And I feel above me the day-blind stars
waiting with their light. For a time
I rest in the grace of the world, and am free.

Yesterday was blue and balmy; today the skies have thickened and the breeze blows crisp. A cluster of golden daffodils, seemingly sprung up overnight, shines from a corner of the front yard. I tip my blooming ball-cap to their nodding yellow bonnets, and await the next harbinger of spring.

I rest in the grace of this world, and am free.

So many people have told me how strong I am. I do not always feel strong.

What does it mean to be strong? My parents recently traveled to Scotland and discovered that our family name is connected to the MacLeod clan, whose motto is “Hold Fast.” That seems, at least at first, a reasonable way of thinking about strength: holding fast, holding tight, holding on. When people ask me how I am doing, I often find myself resorting to a more casual expression of the same idea: “hanging in.” “Strength,” for most I think, tends to call up ideas of persistence, toughness, control, perseverance.

But I have felt strongest, and most at peace, in moments of letting go. 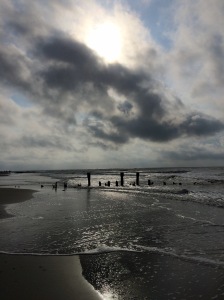 Not long after my initial diagnosis, when I was really reeling, a former student of mine, Carrie, sent me some wise, encouraging words. She wrote, “You’re one of the strongest people I have ever met. Strength doesn’t mean you can’t be mad, that you won’t cry, and that you won’t break down. All of those are forms of strength.” They don’t sound that way, at first. They sound like losing it. But in reality control was never mine to lose. And each of these responses is a form of letting go.

In the past few months, I’ve seen several videos titled something along the lines of “How Heavy is Your Glass of Water?” circulating around Facebook. My preferred version, by Knowable Studio, is “Remember to put your glass down.” The message in each is the same: a psychologist, speaking to an audience about stress, holds up a glass of water and asks how heavy it is. She goes on to make the point that its absolute weight is irrelevant. The longer one holds it, the heavier it feels, the harder it becomes to function. The same is true with stress and suffering in our lives. The lesson: remember to put the glass down. 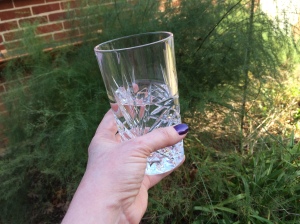 So I have found my own ritual way of setting the glass down, a physical as well as mental process. I prefer to find a place outside and sit or kneel on the ground, hands open to the sky, my heart lifted, my eyes closed. Then I have a short conversation with the universe.

The first time I engaged in this ritual was almost accidental. It was our first evening on Folly Beach, when we were still waiting on some significant test results. I went for a sunset walk on the beach, collecting several Tellin clams and jingle shells along the way. Stopping to watch the light change as the sun dropping behind me reflected off and outlined a bank of clouds gathered over the ocean, I sank to the sand, facing the horizon, and spread my treasures on the beach before me. I told the universe and its various representatives that I needed to give this weight to them: Universe, God, Goddess, Jesus, Buddha, all that is that is greater than my knowledge and understanding, all that is that is Love in this world, I need to give this to you, because I cannot carry it. It is too much for me. I sat in silence for a few minutes, shed a few quiet tears, then rose and walked back up the beach, leaving my shell offering. I felt a distinct lightness, a sense of renewed peace.

I’ve repeated a similar ritual since. Once is not enough; it’s too easy to begin grasping and gripping and holding on tight. Letting go requires practice. Letting go is scary, largely because it does mean giving up the illusion of control.

Sometimes I fear letting go, because I’m afraid it sounds, or feels, like giving up. Accepting I cannot control all that comes, saying I’ll embrace whatever happens, whether it’s what I want to happen or not, feels a little like giving the universe permission to do its worst. Maybe if I just hold on and worry over all the details and possibilities, a little voice in my head says, it will better prepare me, even prevent a bad outcome. Of course, that’s balderdash. Letting go does not mean surrendering my desire for health or long life. It’s simply an acknowledgment that I can hold on as tightly as I want to a desired outcome, but there are no guarantees. And there is power, peace, and strength in accepting that truth.

I remind myself of this fact as we anticipate the next appointments, the next pieces in the process: first, follow-up imaging, post-chemotherapy, to see how much the treatment shrank the cancer, and then my surgery consultation. I confess I’m bracing myself; thus far, outside the “no metastasis” declaration, the news has always been worse than we’d hoped: you want them to say the lump is benign, but it’s cancer; you want them to say it’s Stage 1, but it’s Stage 3. It’s strange, how you can find ways to keep shifting the barometer of what you can accept: I can deal with X as long as not Y, Y as long as not Z. The internal bargaining is exhausting and doesn’t accomplish much. I know I’ll fare better if I can let go of my ideas about what should be and meet myself and the world where we are.

Perhaps I’ve been driven to seek my strength, the solace of letting go, outside on the sand, or under the trees, by the same impulse poet Wendell Berry renders so beautifully in “The Peace of Wild Things”:

When despair for the world grows in me
and I wake in the night at the least sound
in fear of what my life and my children’s lives may be,
I go and lie down where the wood drake
rests in his beauty on the water, and the great heron feeds.
I come into the peace of wild things
who do not tax their lives with forethought
of grief. I come into the presence of still water.
And I feel above me the day-blind stars
waiting with their light. For a time
I rest in the grace of the world, and am free.

That evening on Folly Island, as I made my way back to our beach house, I paused to sit again on one of the large jetty boulders closest to our rental. When I looked down, a single olive shell rested in a cup of the rock at my feet. I reached down to pick it up, recalling that the very first time I’d told my now-husband Steve I loved him, I’d done so on a trip to the beach, by placing an olive shell I’d found on his pillow.

Was this new olive shell a message? A portent? I don’t know. I hold on to it as reminder to keep letting go. It tells me the peace of wild things is with me, and that is enough.