Today is the one-year anniversary of my biopsy.

I had big plans for the blog these past few weeks: a post about anniversaries and milestones, a post about a coming name change, another capturing the weird world of living with tissue expanders (among other things, I now have a superpower: my boobs can predict weather changes). But then I got walloped with the respiratory virus/sinus infection/germfest from hell, and instead of writing prolifically, road-tripping to a concert, and enjoying daily walks on the local greenway, I’ve spent the week in a state of anxious exhaustion, worried about how long I’ll be sick, and angry that all my plans have been derailed by unexpected illness.

It’s a strange throwback to this time last summer.

I’ve been thinking a lot about markers and milestones lately. I attended my twenty-fifth college reunion back in April, and at our class meeting on Saturday morning, we went around the room and heard an update on everyone’s lives. As I thought about what to say, I realized just how eventful—and if you’ll pardon the cliché—what a crazy roller coaster ride the last five years had been. In the time between my 20th and 25th college reunions

It’s been, shall we say, a lot to absorb. 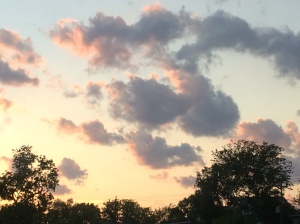 What’s in a name?

So, as my final major reconstructive surgery approaches (nine days and counting), I’ve been thinking about how to recognize the shift—the end of a year of illness and treatment, the beginning of healing and long-term recovery—here on the blog. Language is powerful, and “Still Life, With Cancer” no longer accurately reflects the state of my body, and I think it’s important to reinforce my cancer-free status in my mind.

I’ve been considering several different alternatives. My first thought was “Adventures in Cancerland,” fitting for several reasons. It makes a nice literary allusion to an alternate world full of surprises and absurdities, and I suspect most of us who’ve come to inhabit Cancerland would agree that a diagnosis feels very much like diving down the proverbial rabbit hole. And while I no longer have cancer, I still feel as if I am in Cancerland, with more surgery ahead, ongoing side effects from treatment, and the fact tripping over my own mortality has changed my experience of the world forever.

Apparently, I’m far from the first to have thought of this comparison, as the title has been used, more than once. I could do a slightly different iteration of it, or add a “my” or a “further,” but that triggers resistance in my gut. I don’t want to “own” Cancerland so fully at this point, and I definitely don’t want any “further” adventures beyond recovering from this one. So I think that one’s out.

I also considered another allusion, “The Cancerland Diaries,” which seems accurate enough, and pays homage to a writer I much admire, David Sedaris, author of The Santaland Diaries. Sedaris is also a chronicler of moments of absurdity and surrealism that are only too real. But I’m not as funny or biting as Sedaris, so the echo may not be entirely apt.

I could keep it simple with “Still Life, After Cancer,” which is clear and accurate, but perhaps belies some of the complexities that remain even after being declared free of the disease. Since I kept coming back to the titles that evoked how surreal the whole year has felt, my inner nerd was compelled to look up the etymology of the prefix “sur.” According to the Online Etymology Dictionary, “sur” derived from the Latin super, the root of the Old French sour or sur, and means “over, above, beyond, in addition.” It also has a nice connection to “survivor.” That led me to consider one more possibility: “Still Life, Beyond Cancer.”

The current URL will still take the reader to my blog, so no one else need remember the new name, unless inspired to do so. But I am curious, dear reader: what do you think? I’d love to have your input, via the poll below.

In the meantime, I’m resting up, taking antibiotics and cough syrup, and repeating to myself—as I have so often this year—“This, too, shall pass.” Here’s to reporting on a happy and healthy five years at my 30th college reunion.