You know how when you buy a new car, suddenly that make and model starts showing up on every street you drive, every lot where you park? You’d never noticed it before you owned said car yourself, but suddenly it’s everywhere?

When you get diagnosed with cancer, the same thing happens. Instantly, it seems, every magazine you pick up has an ad for a new cancer drug, or a story of someone’s battle with cancer, or both. Every novel you read features a character with a mother or brother or friend who struggles with the disease (often used as shorthand for explaining the character’s current problems, especially if the mother’s/brother’s/friend’s cancer resulted in death). Watch any TV series long enough, and there will be a cancer mention, if not a full-on plot-line. Turn on NPR, and it comes up in that day’s interview.

Was I just not paying attention before now? Sometimes I wonder. I’ve lost count of the number of people I’ve met who reveal, once they hear I have breast cancer, that they are survivors: the technician who administered my pre-chemo EKG, a nurse practitioner I saw for an unrelated issue, my massage therapist. Friends have told me about mothers, aunts, sisters, co-workers who’ve traveled this path. It’s not that cancer had never entered my personal sphere: my sister-in-law is a six-year breast cancer survivor, and my husband, though his journey took place long before we met, is twenty-nine years cancer-free. But now I see it everywhere. Now it feels epidemic.

And with it come the metaphors. 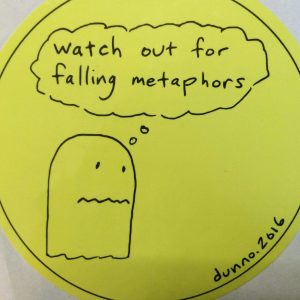 Professional hazard: when you’re a writerly type, and you’re trying to make sense of the weird detour your life has taken, the metaphors are dogged. You’re in the early stages of diagnosis and testing, and you drive to the beach. The weather is gorgeous for a few miles, then suddenly the gray gathers ahead, and your road leads straight into dark, threatening clouds. Rain pummels the car with such force you slow to a crawl. It lets up, a breather. You keep driving, round another bend, the storm crashes again. Just when it seems you’ll have to pull off the road to breathe without fear, the road bends westward, and the sky ahead shines clear and blue. You even catch a glimpse of a rainbow before it shimmers away. A bank of black clouds still hovers to the left. Will the rain follow you? Will the road turn directly into its path again?

You walk a mountain path through a nearby park. The first 100 yards of the trail are open, exposed to the blazing sun. It’s hot and uncomfortable until you reach the wooded portion of the trail that winds through the trees, where the dappled shade and a light breeze keeps the heat in check. It’s an out-and-back route, so you’ll trace those same 100 yards at the end of your walk. They weren’t fun at the beginning, and you know they’ll be even harder once you’re tired and spent and sweaty from the rest of your walk. But the only way home is back through. 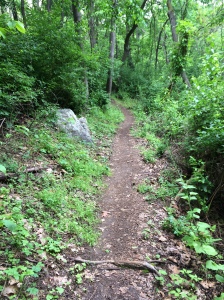 According to F. Scott Fitzgerald, “The test of a first-rate intelligence is the ability to hold two opposed ideas in mind at the same time and still retain the ability to function.” Chemotherapy, I think, is a first-rate test of a first-rate intelligence—and it’s a tough one, physically and psychologically. Embracing chemo means embracing toxic chemicals and nasty side effects that feel a lot like “harm,” even as you understand they’re doing “good” by helping you defeat the threat of the cancer.

Though the comparison feels more cliché than metaphor, chemo, for me, has been a roller coaster. Most breast cancer patients who have chemotherapy are on an every 2-week or 3-week cycle. As a two-weeker, I have one good week and one tough week. To concretize: imagine you’re going to be hit by a truck and catch the flu at the same time. For a week, you have intense body aches, nerve flare-ups, fatigue, nausea or other digestive issues, headaches, some fever. The worst passes after four to five days, followed by a couple days of lingering, less intense symptoms. You feel better, maybe almost normal, for a week. Then you willingly throw yourself in front of the truck again, because the truck is going to save your life.

I’ve been lucky, all things considered. My treatments have consisted of two sets of drugs, the first four a combination of Cytoxan and Adriamycin, and the second four rounds of Taxol. The first were the hardest, in part I think because of the ripple effect of adding drug-upon-drug to control side effects. In addition to the two chemo drugs in my drip, there was a steroid and two anti-nausea medications. I was also given a drug to boost my white-blood-cell count the day after chemo. Add Claritin to counter the bone pain brought on by the white-blood-cell booster, two at-home nausea meds should I need them, and laxative because all the anti-nausea meds cause constipation. I was already taking Ativan to sleep at night and Tylenol for discomfort. We’re talking twelve drugs going into a body that until a few weeks before hadn’t been processing anything more complicated than ibuprofen and the occasional Tums. Thankfully, I didn’t need all that was on offer—nausea wasn’t a major issue for me; I’ve only thrown up twice since I was eighteen. For what it’s worth, I did spend those eight weeks belching like a seventh grader. This phenomenon was not caught on camera. 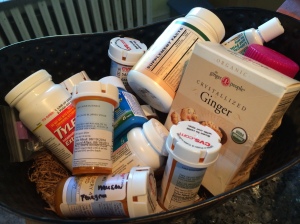 Taxol, for most, is more easily tolerated and requires fewer maintenance drugs, though I am in the 20% of patients (yay!) who experience fairly pronounced bone and muscle pain, and the cumulative fatigue that’s been promised is setting in. But on the whole I’ve done well. I’ve hydrated like crazy, brought yoga and massage on board to help, stayed in communication with my doctors so adjustments could be made, and (knock on wood) had no major allergic reactions. The worst event was a single scary blood pressure crash one evening after the first treatment.

The being yanked back and forth has been, perhaps, the toughest piece. The days I’m out and about, dressed, seeing friends, playing with hats: those are the good days. I seize them joyfully because I can (and because after a week parked on the sofa binge-watching The Mindy Project, I am restless and bored and eager to interface with actual people). It’s necessary to find and relish the joy, to resist succumbing to the undertow of I feel good now, but I know I’m going to feel bad again. The upside of knowing: I can plan around it. The downside: the pressure of trying to cram in everything I need and want to do, especially with increasing limitations. At first, I was fully functional during my “good” weeks. Then I started limiting myself to no more than 2 outside-the-house commitments or errands per day, then one, and I’m rapidly heading toward an every-other-day energy conservation model.

In truth, all of life moves this way, back and forth between the strong days and the hard ones. In a way, having some measure of predictability is a rare gift. In our everyday lives, none of us knows when such shifts will occur, when we will turn into the path of the storm, when the trail will grow hot and steep, when or if the rainbow might reappear.

My current shifts are dramatic and clearly delineated, but the biggest change is in my own awareness. These shifts have always been. They will always be. I can neither anticipate nor thwart them, and trying to do so just makes more wasted energy. The best, the only, place for me, for any of us to rest is here, now, in this intricate present. 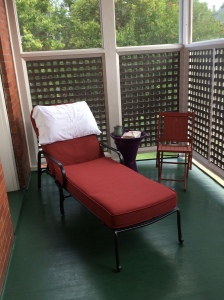 2 thoughts on “Everywhere’s a Metaphor”