I remember only a few details from my appointment with the breast surgeon the Tuesday following the MRI. I remember I wore a black t-shirt and a wraparound raw silk skirt I’d bought at a street fair some years back. She wore a simple black sheath. I remember her saying, “We’re going to get the scary stuff out of the way, and then we’re going to forget about it and move ahead.” Then she drew a picture to explain triple negative breast cancer and reassured me that the “Stage 3” was automatically determined by the size of the mass and the local lymph node involvement, that she hadn’t seen anything to make her think there was more going on. I remember shaking uncontrollably. I remember her asking, as she felt my breast, if it were possible the lump had been that hard and pronounced for long, her whispering in my ear as she hugged me good-bye, “We’re going to be hopeful and prayerful. Hopeful and prayerful.” 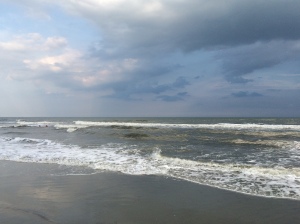 Despite her reassurances that there was no immediate evidence of metastasis, I would need a CT scan and a bone scan to be certain the cancer hadn’t progressed beyond the local nodes. I kept shaking, so the staff moved mountains to schedule the tests as soon as possible, three days away, that Friday. Results would likely come after the weekend.

The verb “wait” dates to circa 1200, “to watch with hostile intent, to lie in wait for,” hearkening back to the Old North French waitier, “to watch,” from the Old French gaitier, “watch out, be on one’s guard.” It takes a few centuries before the specific meaning to “endure a period of waiting” is recorded, in 1849.

Steve and I had been waiting to tell family and friends about my diagnosis until we had solid information, a sense of scope and plan. Plus, I knew announcing it to others would make it inescapably real. But it was becoming increasingly impossible to sit on the news. We were scheduled to travel to Georgia in a couple of weeks to help host my parents’ 50th anniversary party, and they’d begun asking questions about the specifics of our visit. 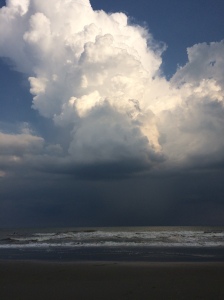 My parents were celebrating a milestone. I didn’t want to burden them with distraction and worry. But the uncertainties were becoming too heavy to bear alone. I remember crying through the phone call. I remember their calm, steady voices. I remember the sense of relief afterwards.

The use of the phrase “waiting game” is first recorded in 1835. Early on, it referred specifically to a horse-racing strategy for horses whose strength was speed over endurance.

Steve and I had also been looking forward to a trip to Folly Beach. We’d originally planned to leave the Friday the scans were scheduled, but we delayed our departure to Saturday. We’d make an overnight trip back to Roanoke on Monday to see the oncologist, then drive back to South Carolina and finish our week at the shore. It was the best compromise we could manage: we’d have our beach trip, and we’d have a plan.

The two days we spent at the beach not knowing whether the cancer had already spread felt like two centuries.

The evening we arrived, Steve left me to walk on the beach while he went into town to pick up some groceries. I strolled along the edge of the breaking surf, breathing in the salt air, gazing out at a distant horizon that made me feel both seen and insignificant. The sky was dark and heavy with clouds, a storm over the water. I turned around to see the sun beginning to set behind me. As it dropped behind another bank of clouds, it outlined one with a bright halo, its rays splaying dramatically across the sky. Light behind a cloud: was this hope?

The literal meaning of the verb “weight,” as in “to load with weight” is recorded first in 1747. Its figurative meaning, to load the mind with weight, appeared earlier, as early as the 1640s.

The side effects of chemotherapy are often debilitating and painful. Knowing your body will be permanently altered by surgery is disorienting, even devastating. But the waiting, all the waiting: for appointments, for surgery dates, for results, for reports, for recovery, for any piece of positive news. Ask a cancer patient, and I think many will tell you: all the waiting is the hardest part.

We got the call from the surgeon’s office Monday as we were driving back to Roanoke to meet with the oncologist: my scans were clear. You know your world has flipped upside down and backwards when “stage 3 breast cancer,” a diagnosis that left you shaking in fear just days before, takes on the modifier “only” and suddenly feels like the first good news you’ve had in weeks.

The nurse had tried to call with results late Friday afternoon. I remembered: I’d been on the phone with a delivery company when an unknown local number rang through. I’d started to hang up to answer it, but I couldn’t get a word in with the woman talking furniture. When I checked voice mail afterwards, my phone said it was full, no new messages.

The sense of “wait” meaning to “remain in some place” is from the 14th century. 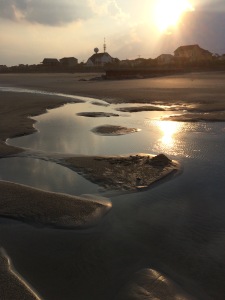 Given a choice, I would not have elected to suffer through those two days of waiting and wondering. But it threw my perspective into sharp focus, gave me a fierce appreciation for the beauty all around me: the gritty give of warm sand under my feet; the spicy bite of fresh shrimp cooked with Old Bay seasoning; the constellation of freckles on my husband’s smiling face. And the sun shining out from behind a darkened cloud.

We’ll wait again, and again. And while we do, my heart breathes every gorgeous moment.

All etymological references are adapted from the Online Etymology Dictionary. Thanks to Tom Petty and the Heartbreakers (via Steve) for the title inspiration.

3 thoughts on “The Waiting is the Hardest Part”